My Teenage Brain Takes That as an Insult

I've been hearing this lecture time after time. It usually comes from teachers or church youth leaders, I have yet to hear it from my own parents. The discussion can start any way, but kicks in about the moment you hear the phrase "You aren't fully mature yet." This is followed shortly by the words " develop", "developed", or "development", often in "your brains haven't fully developed." Over the next minute and a half, you'll hear "risk taking", "cognitive", "reasoning", and " decision making". In the middle of all this, they'll mention the frontal lobe and how teenagers are, if you want it bluntly, stupider than adults because our brains are underdeveloped.
What I can't understand is how a class full of teenagers can sit there blank-eyed and soak up the message. My teenage brain takes than as an insult.
"Oh, but there's science to back it up."
Maybe, but have you seen the data yourself, or did you just skim the article? I'm guessing it was the National Geographic cover story from October 2011.

Yeah, not many people frequent psychology websites. And read the speech bubble-I made it conveniently large just for you. "We're not as crazy as you think."
Let's look at some pictures more culture based than science based.

Alcohol? Self-induced learning disability? Now, now, cartoonists. That second one is politically incorrect. Can't have that now, can we? Oh, and my "sleep deprived" section is much bigger than that, more of an overalll influence than its own little corner.

The judgement gland, located next ot the love lobe, is shaped like a heart? I don't get that. 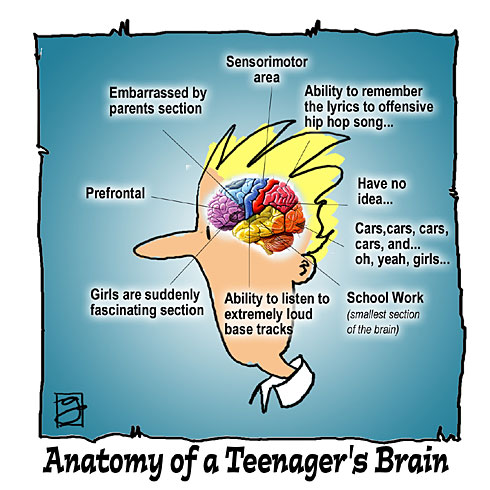 Why are all of these teenagers are male? And why is school so important that it needs its own section? 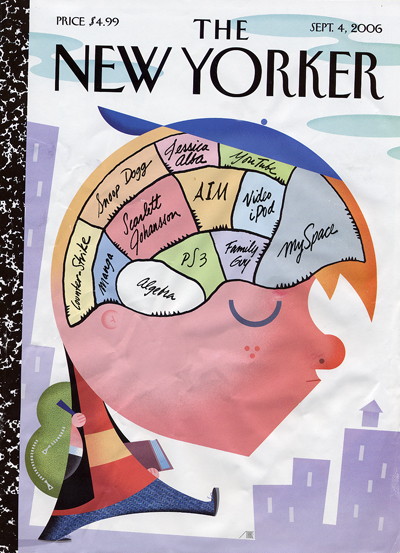 Forget the brain for a moment. Why is that guy's body shaped like the Eiffel Tower?
Youtube and ipod don't need sections. That's all stored in the pocket. Counter-strike? Does that refer to interpersonal relationship battle techniques or some band I've never heard of? I'm leaning toward band because my friends have made it very clear that I live under a rock. Who is this Jessica Alba person, singer or actress?

I can't tell if this teenager is supposed to be a human or warthog.
Slang decoder? What is this, A Clockwork Orange? We don't talk that differently. I can't think of a single word teenagers use that adults wouldn't be able to define. Some grandiose type words are favored unfairly over synonyms (epic, legit) and certain nouns are used as adjectives (hard core, ninja).
Even these definitions won't apply to all teenagers. Slang is regional and ever changing, and we're not the only ones using it.
Now let's get down to the actual science behind these discussions.
A study by neuroscientists (smart people) at Emory University was featured three years ago in the Scientific American. Three years-that's plenty of time to read and used as backup for lectures. But I've never heard a reference, most likely because
1. It contradicts the stupidity stereotype
2. The average person of any age does not read the Scientific American
Here's an excerpt.
"If the existing theory about the teen brain is correct, then the higher the ARQ score, the less developed the white matter should be—but that is not what the Berns team discovered. "It was surprising," Berns says. "I assumed we'd find that risk-taking would be associated with an immature brain." In fact, he found the opposite—a strong positive correlation between engagement in dangerous behaviors and the increased myelination typical of mature brains. In other words, young people who engage in dangerous behaviors generally have a more adultlike brain than their conservative peers.